Judo in everyday life is battle, respect and joy. Building a reputation is like building a sand castle, water can carry away what you have built up when you least expect it. I am grateful to all the clubs I’ve been practicing in, first on Redbergsplatsen then Beltstreet, Second LongStreet, Västerås, Eskilstuna, Frölunda, Sakura, Lindome and Lerum.

To get from home with the 60-bus over to Järntorget, or to Redbergsplatsen. Then take the tram number three  to Second Longstreet 48 GJK (Gothenburg judo club). Sometimes we got lift by our dad to our practice. It was 1976, my sister and brother were also with me. It was often practice in the evening but the experience was different at that time. Not the same as today.

Those who were with me at the time, remembers how the training’s were. When we came into the dojo, we were so numerous that we didn’t always fit on the mat all at once. Although all were from the same club. But the feeling to step up on the mat and just grab hold of someone, was a good experience. The struggle to get through the yellow belt and to not understand what you did, to finally stepping up to the first Dan. At that time our belts meant to really know what, how and why. It was important not to get belts too fast, because it would appear on the competition mat. A familiar friend said many years after I had been in Judo Club Budo that I had a better judo since GJK. In order to exercise in an elite club that GJK was tough for me. That perception I have with me today and certainly it was so.

All the times my parents (mostly mom) grabbed me and said “you are going off to practice”. That was when I had the most desire to be at home. I did n’t want to leave because it gets late in the evenings and a long way to go back and forth. But in judo, I found the happiness I needed. After all hours of sweat and blood that is to win the battle against my own fears, to get to a competition or to get new belts.

There are many ways to throw another individual but why do I go into the fight entirely voluntary? Maybe it’s because I started with judo in at a young age. Okay, after testing football, swordplay, karate, running, tennis and diving, it was judo I fell for. The battle is complex and life is an adventure. This struggle that many people I talk with talks about the same feeling. To reconnects to the child’s attle within you and you want to relive that feeling.

Like when I broke my collarbone on GJK a long time ago, I had to take the bag with my healthy arm. It was a struggle to get home. Or all the scrapes on my feet and neck I got in my randori.

The battle has so many different layers.But finding your own and become friends with it: to lift it up on the table and getting older, finding and calling cards without getting angry. There are so many different ways to look at where to see the battle. Is it in the contest? Is it in the will to take my next belt? Is it just to walk and exercise? Should I become a judge? Sitting in a board? What role suits me in the club? Can I be there today and just practice?

For me it has always been about being in the dojo and to learn. For me, the battle in training and to be who I am in the dojo. I got the opportunity to be myself but it had always been a struggle. But judo has a culture meaning that everyone is welcome.

This word is so difficult to implement, yet its so simple; having respect for yourself, to find yourself in this judo world that has so many different sides to it. Why should I respect others if I don’t respect myself? But it is about finding harmony within yourself. Can I respect myself, it’s easy to respect others. Through all of randori (free movement of  throws) to the kata (determined movement). All the time it takes gives the respect for others and for oneself, for all the hours you put in.

In a dojo, we are all different but we have one common denominator: Judo. In the respect to myself, to decide how and where to put my training. I have been to many different clubs and dont really have a home club. But in exchange, it has only enriched my judo. But I’ve always been welcome. It has surely with the culture I had with me from the judo club at Redbergsplatsen with Kurt Durewall. Even Budo and GJK. At a young age, it was perhaps that I didn’t have to adapt myself to anyone or any club.

To crack the code, when the movement is there, to become perfect. I will then exercise it a thousand times more. Am I a fool when I repeatedly make the same motion all over again? Why, yes, because it is the pleasure in it. Joy is to come home and be so tired that you can not be bothered to even sit up, and you just want to sleep. To find happiness in coming home and feeling that tonight I’ve made a good exercise session. The joy is to convey some knowledge transmitted to others and then is added to their knowledge. Joy is when the respect and fight get to others, then they take over and start their own judo clubs and proceed judo towards the future. Then you can just stand by and with joy see how they develop. Inhibiting the young is like taking away their future. 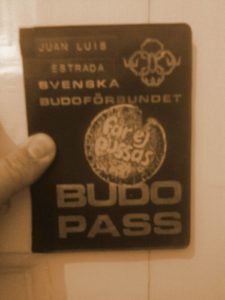 I will not mention camps or competitions(not been competing much) that I’ve been on, instead I have chosen the other memories.That I for example already have mentioned in my post. I want to create more understanding for me as a person and as a judoka. I have not been to Japan or even been close of going there. I want to describe the battle that keeps me in judo and the respect for the sport that has been with me for the most part of my life. It gives me the joy of being human. I take my responsibility and to ensure my drive, getting to long for it and find myself in all of this. The answer lies in going into the dojo and get to be there. To remember the movement and to see what I can convey to those who want to learn.

Now I’m colored by judo, but whatever sport it is possible to take my words into consideration. I have always been welcome among the elite and as a beginner. It is a feeling that can’t be described in words, it must be experienced. Of course, judo also has its drawbacks, as it becomes more controlled but that’s another story. Boards and people who climb. Judo has always had its dilemmas.

But for my part I’m happy when I’m writing this because I was asked to write a post. In sports there will always be some bad people and those who help themselves by stepping on others. With so many different clubs and with this wideness,when judo has only been in our country since 1955. It is now in 2015 the adventure begins as our different approaches alters judo and brings us into the future.

I didn’t stay at the clubs Frölunda, GJK, Budo, Sakura, Västerås, Eskilstuna or Lerum. For me it was about adapting and find my own battles, joy and respect for me as an individual. I need to feel good but I also have respect for all those who are fighting to keep their clubs. It was for me to take every opportunity in every position and if the club is subtended, I have been there and then left. In judo for me its about to go on the path where you have the most benefit of things, don’t get stuck in a box of the mat without being able to move on. It’s judo for my own part, the group is important also and to be able to view the content of judo. To be sustainable now, in 2015 the judo is there, like a love for life. Life has its time and im taking it.

I want to thank all judokas and all martial artists that I’ve been training with, for my part, it is judo that has shaped me as an individual. To thank you all like this enriches my life as a judoka and as a man. There are so many people that I would like to thank by name, but I will do it like this instead.: Anyone who knows who I am and have met me, without you I would not be who I am today, and I mean this from the bottom of my heart.